Will SCOTUS Protect the Right to Protest?

Since this country’s founding, when we’ve had something to say, we have taken to the streets. We’ve come together to celebrate our identities, to protect our land and our communities — and to push for change following injustice and tragedy. But if a recent decision from the Fifth Circuit Court of Appeals involving a Black Lives Matter protest is left standing, the right to protest will be in serious jeopardy.

That is why, today, we’re asking the Supreme Court to take the case.

The Fifth Circuit decision stems from protests that erupted in Baton Rouge, Louisiana after two white police officers shot and killed Alton Sterling, a Black man, on July 5, 2016. In the days that followed, people took to the streets to make clear that Black lives matter. They came together to express outrage, to call for accountability and justice, and to demand change.

Police responded not by engaging with the substance of protestors’ calls, but with riot gear, excessive force, and illegitimate arrests. And one police officer brought a civil suit for monetary damages based on allegations that, in the midst of the protest, someone (we don’t know who) threw something (we don’t know what) and hit the officer (we don’t even know his name). The one thing we know with certainty — and based on the officer’s own allegations — is that the individual the officer sued is not the person who threw the object, but our client, DeRay Mckesson — an activist who was there to add his voice and to amplify others. 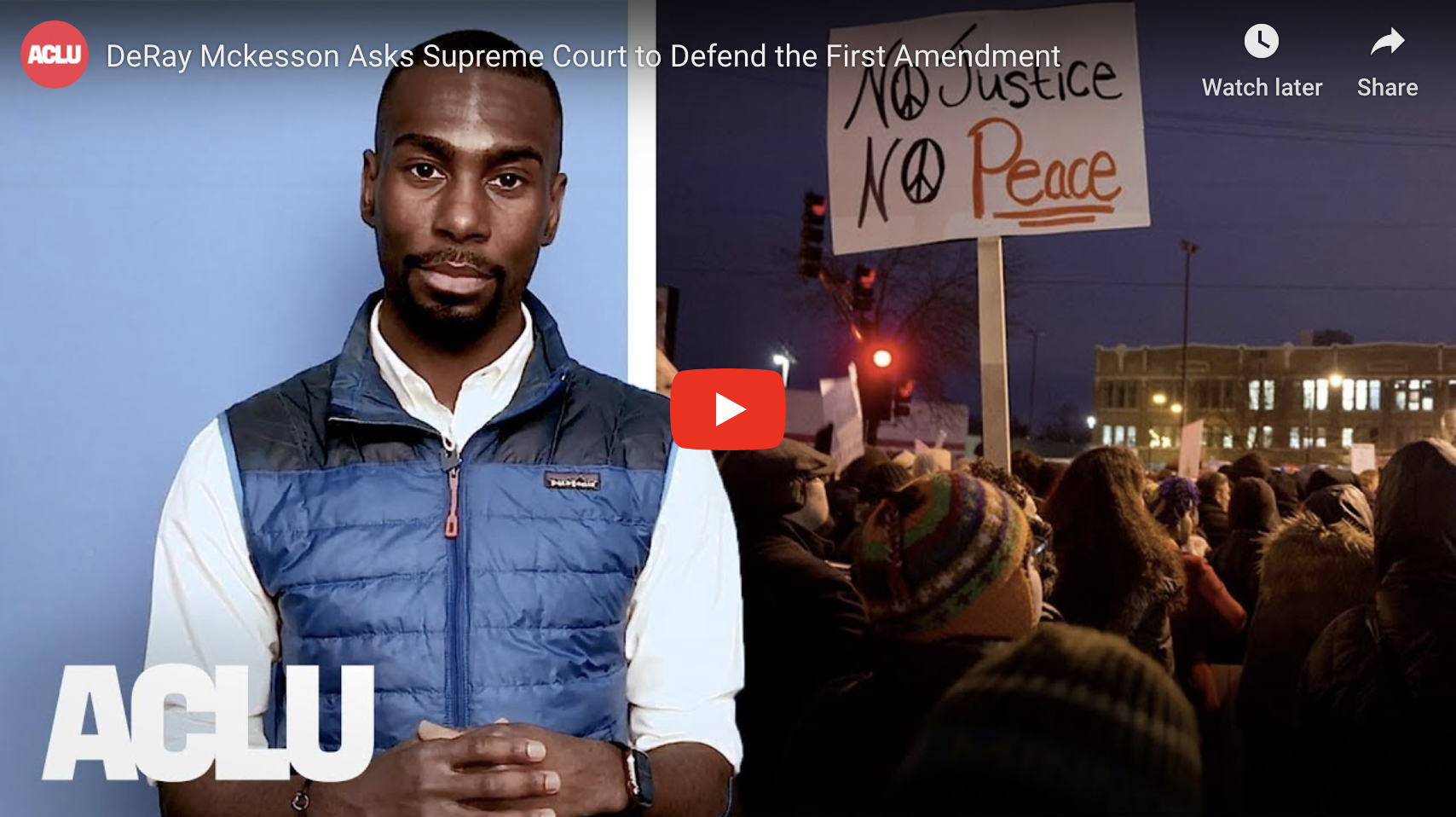 The district court that first reviewed the case correctly dismissed it as violating a core tenet of the First Amendment: that, in the context of a protest, individuals cannot be held liable for the unlawful, unintended acts of others. But, after the officer appealed, the Fifth Circuit issued a baffling and deeply concerning order that ignores that principle and, in doing so, puts all of our free speech rights at risk. The court concluded that a protester could be held liable for the foreseeable, but unintended, unlawful actions of a fellow protester. If allowed to stand, the precedent could signal the end of protest.

Why? Because, during the protest, Mckesson (according to the judges’ reading of the officer’s allegations) directed others onto the street in front of police headquarters, purportedly in violation of a Louisiana law. Because that act was allegedly not protected by the First Amendment, the panel reasoned that Mckesson could be liable for any harm that followed — including another person throwing an object at an officer — as long as it was foreseeable. And, the panel concluded, it was foreseeable: As soon as people stepped out onto the street, police officers would inevitably come to enforce Louisiana’s laws, and that was enough to expect that violence could occur.

This logic is not only flawed, but also reveals a dismal view of police-citizen interaction. Even if law enforcement does often respond to protests with excessive force, that is not something courts should accept — or protesters or police should expect — as a given.

And the court’s flawed reasoning is also dangerous for another reason. It means that, in the Fifth Circuit at least, protest leaders can find themselves on the hook for an unlawful act they did not intend, committed by an unidentified person they neither knew nor controlled.

To be clear, the First Amendment typically does not protect someone from liability for breaking the law, even if they did so for political reasons. That means that, had someone sued Mckesson for delaying traffic, he may have been liable. Equally, had the officer sued the individual who threw the object, the officer’s case would have been able to proceed without threatening speech rights. But, in the context of a protest, the allegation that Mckesson unlawfully impeded traffic cannot suffice to make him liable for the independent, unintended act of the object-thrower.

The Supreme Court made this clear in 1982. While the Constitution does not protect violence, the Court held, it does limit the government’s ability to place responsibility for that violence onto peaceful protesters. That seminal civil rights case, NAACP v. Claiborne Hardware Co., has been cited repeatedly to ensure robust speech protections, including to dismiss a lawsuit against then-candidate Donald Trump for violent acts committed at a campaign rally and to challenge efforts to stifle Keystone XL pipeline protests.

The Fifth Circuit’s opinion risks undoing all of that. Under the Fifth Circuit’s theory, a police officer — or, equally, a counter-protester — need only allege that a protest organizer directed or enabled other protesters to do any illegal thing, from overstaying a permit in order to pack up, to pumping the volume up a little too loud, to conducting a sit-in that obstructs access on a sidewalk or constitutes a trespass. Countless potential plaintiffs could argue that their injuries — sprained ankles, broken windows, extreme stress — probably would not have occurred had the protest not been at that place at that time, or had police or counter-protesters not responded as they did.

With these costly risks, who would be willing to lead a protest? And, if, in a court’s view, the likelihood of police presence is enough to make protesters liable for violence, nearly any protest could lead to incalculable damages for organizers. Police presence is expected at the vast majority of protests, especially those that draw large crowds or focus on issues of public controversy.

Had this been the rule throughout our history, those leading this country’s seminal protests — from the celebrated civil rights protests of the 1960s to the anti-war protests of the 1970s — could have faced ruinous lawsuits. And, under the Fifth Circuit’s logic, advocates who were prosecuted for violating laws that, once they reached the Supreme Court, were deemed unconstitutional could equally have been burdened. In other words, the same individuals who established core First Amendment precedent — and who the Supreme Court held could not be criminally prosecuted — could have found themselves facing huge civil judgments for their advocacy, including at segregated lunch counters and libraries.

Thankfully, this isn’t how the Supreme Court has ever looked at rules of liability in the context of protected expression. And the Supreme Court should take this opportunity to make clear that it’s not how it looks at those rules now. Otherwise, we may find our streets much emptier.