In Nevada and across the nation, Black and Brown people are are disproportionately affected by law enforcement and are overrepresented in traffic stops, citations, and frisks.

And under our current state laws, a single traffic ticket can lead to license suspension, warrants, arrests and even jail, because Nevada is one of only 13 states that prosecutes minor traffic violations as criminal offenses, rather than as civil infractions. As a result, a traffic ticket often escalates into a warrant, leading to Nevadans being arrested and jailed simply because they can’t afford to pay the fines, fees, and administrative assessment imposed.

At a time when so many Nevada residents are losing their jobs or homes and unable to meet their basic needs, this criminalization of poverty is adding fuel to the fire.

And the racial disparities are stark. According to data from the Fines and Fees Justice Center and UNLV, Black residents make up about 12% of the City of Las Vegas and 46% of the city’s traffic warrants. The numbers aren't much better for residents identified as Hispanic or Latinx — together Black and Brown people make up two-thirds of the city's traffic warrants.

It's a poverty penalty and a vicious cycle. Once a person is trapped in it, it's hard to break free. And it's not even good economic policy. Punishing people because they don’t have money is one of the least efficient ways to raise revenue.

Warrants are a counterproductive and expensive method of coercing people to pay a traffic ticket. In Clark County, the average person arrested on a traffic warrant spends almost three days in jail at a cost to taxpayers of more than $400. Three days in jail often costs a person their job, their housing, and even their children, making it far more difficult to earn the money to pay their court debt or to care for themselves or their families.

But the tide may be turning in Nevada. Consider for example, Carson City, which stopped issuing warrants in traffic cases in 2019. The city’s collection rate increased by 8.5% following implementation.

LEARN MORE ABOUT THIS ISSUE 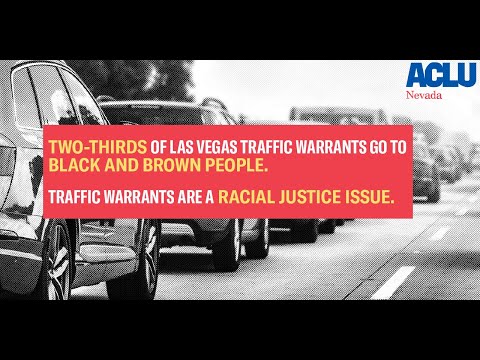 Breonna Taylor was killed during a no-knock warrant. We can't let...