The 81st Session of the Nevada Legislature began against the backdrop of the COVID-19 pandemic and a summer of unrest following the high-profile killings of George Floyd, Breonna Taylor, and Ahmaud Arbery. People across the country and here at home took to the streets to demand an end to systemic racial injustices.

The pandemic threatened to exacerbate Nevada’s housing crisis by displacing people from their homes. Clark County’s initial response for the presently unsheltered was to place people in an open-air parking lot — while thousands of hotel rooms lay vacant — an image that earned national attention. Making matters worse, the state made painful cuts to programs essential for Nevada’s most marginalized communities.

At the same time, the issue of police killings came to a head in Nevada. Video evidence revealed that Jorge Gomez, a Las Vegas man who was shot and killed by police during a Black Lives Matter protest, did not raise a weapon toward officers, undermining the claim that Mr. Gomez was a danger to police.

Advocates had high expectations of lawmakers to act boldly on these issues. Assembly and Senate leadership deserve credit for declining to pass policies with egregious civil liberties implications, and members of both parties have improved on many issues important to civil libertarians. And they made meaningful progress such as decriminalizing traffic offenses; providing birth control without a prescription; scaling back the use of projectiles and tear gas at protests; funding immigration defense; and passing expansive voting rights legislation while other states voted to inhibit the fundamental right to vote. It is also important to celebrate that for the first time in our state’s history. a chamber of the Legislature voted to repeal the death penalty.

However, the people are fatigued by the molasses speed of policy making. We marched in the streets, inhaled tear gas, were hit in the back by rubber bullets, and cried, “SAY THEIR NAMES” in a clear and loud call for substantive change — not for the Legislature to simply codify Metropolitan Police Department policies. Impacted communities called for a Legislature that is bold on police accountability and a Senate that will decline to advance legislation that would lead to violent police encounters in casino resorts. They want an Assembly that will not let important housing rights bills die in committee, and they want a Governor who will not run away from an opportunity to end capital punishment — a practice he has acknowledged as deeply flawed and unjust.

This report gives insights into the behind-the-scenes work on several bills impacting Nevadans’ civil rights and liberties. Our team tracked nearly 300 bills, provided testimony and educational materials, met with legislators, negotiated with opponents, and was successful in keeping bad policies from advancing. We are proud of our work this session, but our fight continues. 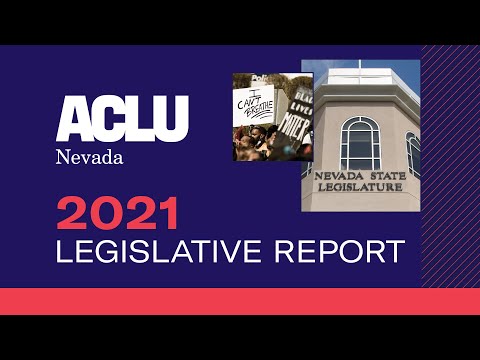